A friend and I were talking the other day. The conversation drifted to the church she was attending. She loves her church. She was telling me how much she loved the people, loved them being around her, her husband and her kids and how much she trusted the leadership there, what a good heart they had and so on.

I found myself being inwardly very cynical. The conversation in my head was something on the order of, "Yeah, right. That is what I thought all those years. You had better not put your trust in anyone there. It is only a matter of time till you really find out what they are like."

I guess it showed on my face. Sometimes it is hard for me not to let you know how I'm feeling if you are sitting across the table from me.

So we talked about it. I told her that I felt like a woman whose husband had cheated on her and left her. Now I don't trust any man. I know the hurt they are capable of. I've been through the divorce. I can't imagine trusting again.

We started talking about trying to visit other church bodies. She understood how it would be hard but maybe if I tried now, in two years I may have a different perspective.

I laughed and told her I felt like the wife again who's friends are trying to get her out there to date a little.

And, she reminded me, "in the two years you have been gone, you have become a different person."


I feel stupid verbalizing that I was waiting to have it all go back to the same way it once was. All I needed to do was to read my own blog over the past two years to see the ways I have changed and the mindsets that I no longer have. I could not go back to them. They probably won't come to where I am. It truly is done. The relationship is dead.

Relationship with the individuals will always be an open door if they want to walk through it, but the "thing" I had with them for so many years is passed. Done.

Again, I feel stupid for not realizing that this was what I was thinking all along. It seems like such a "duh" kind of thing. But it is better to realize it now I guess than later or never.

After letting that set a few days I realized that my heart somehow turned to the future in ways it had never done before. I realized that I was no longer waiting for the old things to come back. It was just us...here....now. It was suddenly what lies ahead. It was like a ship that had been loosed from its dock.

I wonder where we will go, what we will see, who we will be with in the next few years. And that is a new thought to me today.

When It Looks Like Your Team Is Not Winning 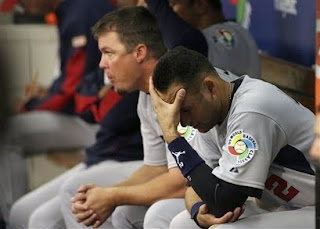 As we have been gone from our former church longer and longer, I find that life is happening to all of those who have left. Sounds like a "duh" kind of statement doesn't it. My point is this. People have left and I find myself watching their lives with a bit of curiosity.

Our church often preached that you would lose your destiny when you left their fellowship. Not only your destiny was at stake but since you were now "out from under covering" this left you open to be deceived, have bad things happen to you, have the favor of God removed from your life, be directionless, discouraged, depressed, and disheartened. (Like my alliteration?)

In short, you could look forward to your life completely falling apart until you returned to the "family."

So, as people have left, I think there is a bit of competitiveness in me that wants everything to go well with them. I have noticed that when I hear that something has gone well for them, I not only rejoice in the good thing but I also rejoice that "our team" is looking good. The same happens when something bad happens to them. I not only grieve that something bad has happened, I cringe a bit because it makes the "team" look....well....not so good. Especially when a person's choice is involved in the matter....as in their decision to follow God, or stay married to their spouse, or not move in with their boyfriend.

Fact is, sometimes our "team" is not looking so good. Jobs applied for - not gotten, cancer appears on the screen, separation from a spouse is spoken of, a child angry and bitter at God, health deteriorating and not getting better, prayers unanswered, some dreams unrealized, some are directionless, some are discouraged, depressed, disheartened.

In actuality, all of this happened in the church I belonged to. If it was blatant enough people just left the body first. The rest of it happened too, we just didn't talk about it as publicly. There were praise testimonies of God's favor, healing and provision. You just mostly did not hear the bad stuff.

Yes, these bad things will be brought up as a weapon to keep those who are still there in their seats. Our lives will be used as ammunition to convince the people there that God's favor is no longer with us and won't be with them if they leave.

Fact is, this is just life. Both in and out of the old church. And actually, we are all on the same "team." We are all the Father's kids.

The other day I repented for my "team" mentality. I quit! I'm refusing to even keep score anymore. I'm going to keep from separating us into two groups and rejoice with those who rejoice and weep with those who weep. The game was not one I was supposed to be playing anyway so I'm taking my ball and going home.