On Hospitals and Church Buildings 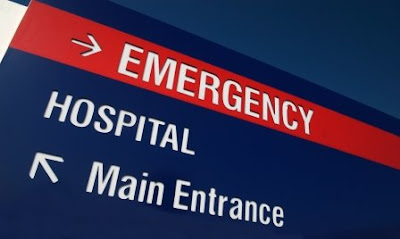 The other day I went to get some blood work done at the hospital for a yearly checkup. As I entered the doors of the hospital and looked at the Emergency Room area I remembered the many times we have visited. The time my daughter’s throat swelled up because of an allergic reaction to some meds, a finger needing a few stitches, my father’s visits – some needed – some not so needed, the visiting of friends and praying for them as a crisis was averted…. As I sat there I was grateful for the availability of hospital care.

As I sat there I realized that if I were sick and needed attention right away, I would come through the doors of this establishment. I would come to where I knew I could find help.

It was then that it struck me. I think the world that we live in views the established church in the same way. If they are having spiritual questions or having a spiritual crisis the first place that they would think to go would be to a place of spiritual healing – a 'church.' Now I would hope that they would know a Christian and talk to them first but the fact is that in our world today the most common response would be to look for help in the doors of a building that says that they represent the God that you are looking for.

Then on Tuesday, our local chamber business group was invited to the opening of a new church building in our area. Marsh and I have known this pastor since coming to the area as he was on of about 6 churches that participated in some city things with us. We decided to go and participate as Marshall is part of the chamber now with his new job. Plus we wanted to congratulate the Pastor and his wife who we knew were probably pretty happy to finally have a home for their congregation.

As I walked through this new building I realized that in the same way that the hospital will draw those who are in need physically this new building would draw those who were in need spiritually. For the first time in a year I saw that as a good thing. This church would not be perfect, the pastor would not always do the right thing and surely the members fight about stuff, but mostly it has remained a healthy church through the time that we have been here. The staff has not changed drastically year after year and the feeling you got as you talked to the leaders of the different departments was that they might actually care for those who are there.

So I walked into a ‘church’ building the other day and did not throw things. I saw that it could actually be a good thing for the people in this community. I would say that I might be healing up a bit wouldn’t you?
at 9:05 AM

Sounds positive to me. I'm just of the opinion that fewer and fewer people are turning to the established church for help in times of need. Also there are some church buildings where people won't find much comfort. You know that too well though, I know.

Barb, I went through something similar a few months ago. I went to a charismatic church for a Sunday morning service just to see if I could sit through it without any judgment rising up in my heart. I was able to, and for me it was a great day of knowing I'm truly free. It's nothing I want to be part of, but I needed to know I could go and have my heart remain in a loving, nonjudgmental state. Congrats to you! It's a big stepping stone!

Wow, good for you. It's been four years now and I still want to overturn tables.

I find it is easiest to be nonjudgmental while pretending they don't exist anymore ;)

Yes, I would say you are healing. I do agree with Adam's comment, though -- the number of people who seek out the church is dwindling.

The problem I have with the new building (or most old ones) is that it tends to keep Christians busy and boxed up. Hospitals are great, but if they aren't accessible, or people don't know that's where to find help, there has to be another approach that brings health care to the community. There are a lot of very effective, lower cost ways to deliver the health care most of us need on a day-to-day basis. I think the same applies to the church and meeting the spiritual and other needs of the community.

Looks like healing to me. I agree with you that it would be best if a person actually knew a Christian that they could go to for help.

Hm. I think it is healing...like Tracy says, a sign that you're free.

But I still throw things. Well, I don't actually throw anything. I guess if I did, I'd only throw cotton balls so I didn't damage anything, but it would still make a mess. It's the sentiment, ya know?

Hmm... I don't think I'm ready - I went to some meetings a few weeks ago and I was ready to bolt through each service - was asking God to protect my heart and mind while there and got angry at the religious attitudes... Hmm... I guess I have a way to go - when I think of my ex-pastor and of going to visit that church, I have a strong desire to either pop him one right between the eyes with my knuckles... of stand up in the middle of service a boo... ;-)

There is a danger in us all in being a little too critical of the established and making that our job and forgetting what OUR mission is about. I AIN'T GOT TIME TO BE BITTER - I've got better things to do.

I love this blog. I attended a church that looked great on the outside, yet, people who really needed help and acceptance could find none there. I know out there there are churches that help people. It is sad, however, that there are also many that don't.