"Miss"-Taken Identity - Why Men Don't Want to Hang Around God 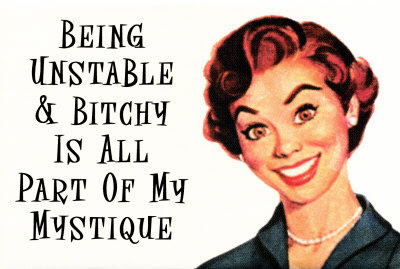 Brother Maynard is pondering those who are pondering the reasons why men don’t want to go to church and how to get them into the pews.

Personally I don't think it is a problem with the feminism of the church as much as it is the Feminism of God himself - and not in a good way.

In the past weeks as I have focused on Father and how warped my image is of Him, I have learned something. If my image of Him was correct, why would I ever have wanted to be close to Him? If it weren’t for that whole “burning in hell if I rejected Him“ thing, why would I have ever wanted to have a relationship with Him. I’m wondering today after reading about men not wanting to be in church if this is really the issue.
See, my head knew God was loving, kind, patient and all of that but my heart would have described Him as somewhat of a very pissy, PMS’y and even bitchy female deity. (You can trust me on this - I’ve had 4 daughters….sometimes we should have a sign on the door to warn people) I would have NEVER said this out loud before but here’s how I was viewing God:
My old God was perpetually frustrated with me. My head believed he loved me (after all he did save me from Hell) but my heart believed that he was just waiting for me to get my act together. My head believed I could trust in Him but my heart believed that anytime something bad would happen to me it was Him trying to get my attention to straighten out and do what He wanted me to do. I had to pay him off to get his blessings, worship Him so that he wouldn’t get jealous of all the other stuff that I loved, give him all the glory so that I could not be seen as keeping any of it for myself, and perform “acts of service” (giving, praying, reading my Bible, ect) so that he would be pleased with me. I never knew when His “patience” would run out and he would “Blow.” If I screwed up I was never sure what kind of mood I would find Him in and so I just stayed away for a few days. Mostly I had a schizophrenic God that my head told me was trustworthy and kind but my heart did not believe a word of it. He was like a woman on her “time of the month.”
Now all you out there who have Husbands. Tell me this. If you husband has a close friend, describe him to me. I bet there is not a manipulative bone in your husbands’ friend's body. I bet your husband feels like he can be himself. I bet that this friend is not volatile in temperament. I bet that you husband can always count on his friend to just be “normal.” I bet your husband does not have to “do things” to please his friend. I bet that that person rarely ever makes your husband feel guilty about things he “should be doing.”
See, guys are into relationship despite what we may believe about this. They just are not into relationships that require them to sacrifice their souls for. (I’m not talking about relationships that they might find sex, money or power in it for them - I‘m talking about just pure friendship kind of relationships) They mostly all hate manipulative relationships and they love the security of knowing what that relationship is going to require and the ability to be themselves. This is not a character flaw in a person - it is normal and healthy.
So my advice to those who want men in their pews…..preach the truth about God. Maybe I’m wrong but I think that if men (and truly women too) in our world were shown a God of love and a God of joy they would WANT to hang out with not only Him but with those who love Him too. Remember, Jesus did not have a hard time keeping a bunch of “dumb ol’ boys” hanging around Him.
Who would want to hang around a bitchy, PMS’y God?
at 9:28 AM

Interesting point. I have never done well with bitchy, PMS'y woman, nor can I stand manipulation. I hate the games and the pretense, UGH!

Although, as a woman, I'm sure I have my own moments.

But my view of God (that has been changing) certainly involved him being rather unstable and hard to please (although I wouldn't have phrased it that way in the past).

Great Blog Entry! I found your page from Tracy Simmon's. Glad I did. I'm looking forward to reading more of your entries.

Just wanted to let you know...I see that on your 8/6 entry, you cite many of Darin's passages from his book. Great! Just also wanted to let you know, that he just recently posted a Podcast (8/3) that completely relates to this Blog entry - of God and church being feminized. I encourage to drop by his cite and listen to it!
www.darinhufford.com

Barb, I had much the same concept of God growing up as you did, although I don't think the whole bitchy, PMS thing entered my mind. :)

When I realized that God was not like that, but was someone who loved and accepted me no matter what, it changed my life.

I know some out there have not had good fathers in their lives, but I can't help but think that God is called Father for a good reason. He is the perfect Father.

My old God was same as yours...
It was a perverted view contrary to the God Jesus presented to humanity.

ROFL -- you are right, no one can hold a grudge like a woman and that is exactly the God I was taught. Maybe this is the problem I have had with the feminisation of God. I have no problem with Him being ALL, but is seems there is a push to make Him ultrafem all of a sudden, even among my close blog friends. To me, He is what He is and I don't sweat it much anymore.

You really have me thinking....

You make an interesting point, and I'll have to think it over. I always thought the turn-off for men (and I am one) is the girly, effeminate nature of most churches' worship and internal discussion.

A day at the lake fishing makes a man feel a lot closer to a strong, meaningful creator God than a morning of singing about how "He walks with me" or hearing a lecture on personal spirituality or minutae of morality.

Hmm... this sounds a lot like what I have been struggling with as recently as this week. My head knows a lot of things that my heart doesn't believe yet. Sigh. I am still afraid of Papa being disappointed in me - 'never good enough' is something I have lived with most of my life. Yeah... thanks for the honesty of this post. It helps to know that I am not alone in this twisted view of Papa.

Interesting and thoughtful concepts. Thanks for the bold, direct ideas.

I decided to finally create my own Blog. I hope you will come visit "me," add me to your Feeds, read my entries, and leave comments. I'd love that!!
By the way, your Blog is in my Blogroll!

I just love your blog and this post has a great point about the nature and love of God.However,I just cringed at the use of the "b"word. I know it is not a huge thing, but I would have hoped for a more tasteful word. I'm not fussing or being ugly, it is just that slang words like that grieve my spirit. I still love your blog.

Anon,
Grateful to have you reading here. As for the adjective that I chose to use, here is my reasoning. I could have described the behavior that this word conveys. It would have taken me at least a paragraph to do that. Using this word reduced it down to one word instead and conveys the message clearly. While I would never condone or call someone a Bitch, the word bitchy is purely a descriptive word that our culture readily understands. I don't mean to offend intentionally.

I never would have put it this way, but it makes sense! Now it's easy to see why you see people (men too) act like teenage drama queens in church! They are just imitating the thing they worship :-).

Yeah sometimes I get lost in thinking about things from what I see as a distorted view.

HOWEVER, I am deeply grateful for a bunch of guys that get together with me just to hang out and talk about what we're going through. Small but like you said, those 4 guys are exactly to me as you describe a husband's close friends.

Which is what I need. And every guy. Only thing is that a lot of guys I think get the feeling that when you're talking "relationships", they get turned off because they think of ones like how women think of them (I do this too sometimes). And don't even tune in. Talking about their issues? Yeah - not so many want that all the time.

I think the way we call things makes a difference.

surprisingly, this blog disturbs me a bit. while i totally agree with brother maynard's post on the issue of 'guy church' (huh?!), i find this description of god and of 'husbands friends' upsetting only because of it's negativity towards women. i have a hard time seeing the feminism of the church - if it's there, it's barely breathing - and, for the sake of women and men alike, i especially hope that the Feminism of God isn't a main problem, as you suggest. this sort of implies that men are turned off of god because he requires them to be feminists...?!

i do have a husband...he does have some friends....and they're great, just as your blog describes. what troubles me, is that your description of the old god is curiously and negatively female. following this, your description of your husbands friend seems misogynistic at best. yikes. i have to admit my mind is a bit turned around on this one.

i also think the demanding, manipulative, disapproving god of your past will remind many people of their own disapproving, aggressive fathers (or other men in their lives), not just their 'bitchy, pms'y' female friends.

just thought i'd pose an alternative reading to your blog since everyone seems to have agreed wholeheartedly with you so far. i appreciate your response to brother maynards posting - the issue is definitely one worth tackling...but it's also a complicated one.

Anon, thanks for the alternative reading!! This is probably warped by the fact that most of the women in my life have been impatient and unforgiving and demanding and the men in my life (husband, father, sons) have been much more "God like" then that. You are right though, I did give off a very anti female view. I do believe that God truly embodies all that is good about both the male and female persons that we are. Thanks for commenting.

And thanks for having me look up mysogynistic!!