Pursuit of The Sinless Life 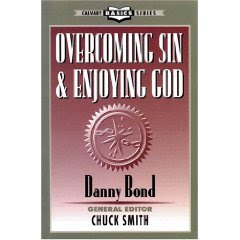 I have been a Christian for at least 48 years of my life. Just this week though I realized something about myself that I had packed along on this new journey of Grace. Something that I had assumed all along and had just come along with me into what I thought was a new mindset. In actuality, I had just carried over the old mindset and applied it to the new.

The thing I realized was that at least from the time I entered Bible School at 19 till today I have looked at salvation as a means so that I might not sin. Of course I always knew I would never be sinless. But at least my idea of this Christian life was that as I "grew in the Lord" I would sin less and less.

I just got rid of a lot of books from my book shelf the other day. As I stood back and surveyed them I realized how very many books I had hoped would free my from my sinful self. There were books on how to make my marriage better, books on deliverance, books on taming the tongue, books on becoming more godly, books to help me understand the Bible more - because we all know if we know our Bible, we will not sin as much. (My God, just do an amazon search on Joyce Meyers. People have made their fortunes on sin management books.)

Then as I was listening to a podcast that Darin Hufford did the other day, (Super Spiritual Expectations) he blew me away with one statement. He said, "There are a lot of people who are wondering if they embrace this Grace message, that maybe, then, they will experience the freedom from sin that never came in their old religious life." He went on to say that the message of Grace is about a relationship - not about becoming sinless.

I realized that I had thought to myself, "Maybe if I understand Grace, understand the Father's heart for me and understand how to actually have a relationship with Him, maybe I will get a handle finally on my _____________." (fill in the sin of the moment) I was simply replacing the books on my shelf with the message of Grace in hopes that it would do for me what they left untouched.

There is a fine line somewhere here that I don't want to cross. I'm really not sure where it is though. I feel like Paul who says, "so will we sin more just because of Grace - Heavens NO." I'm not advocating giving up and just diving into my sin, knowing that Grace has covered it. But it is a mind shift of monumental proportions for me.

The message of Grace is not for me to obtain so that I can finally get my act together. It is offered to me because I can't. It truly "is finished," and there is nothing I can add to this. And so today I find myself overwhelmed by the act of Love that brought this into my life.

(*by the way, I have never read the book shown above. Just thought it was a great picture for what I was talking about. It might be a wonderful book :)
at 11:21 AM

Labels: grace, stuff I used to believe but don't anymore, the brilliance of others

I know this isn't profound but I amazed at how good grace really is and how good God is. I wholeheartedly believe that much of the frustration and strife in church is caused by a misunderstanding of God's abundant love for us. We don't believe the gospel is a as good as it really is so we start adding spiritual sounding things on to it. Eventually we have a very complicated and fruitless version of Christianity.

Leighton, that is the thing about this message. It does not "feel" profound to say it. We have said it all of our lives. We can quote it in our sleep. What becomes profound is when it becomes actually true and we start to live as if it were.

Wonderful post! As I read your post I thought of Titus 2:11, which states that grace has come forward for the deliverance of sin and eternal salvation...

So, in spit of our shortcomings flaws and mistakes (sins) we are still counted as righteous...WONDERFUL!

I really enjoy your posts! Thanks!

Davida, I guess I always saw deliverance from sin as being delivered from wanting to sin, not delivered from the penalty of my sin. I think I knew better somehow but what I thought/caught was far different. Thanks for all your kind comments and additions to the conversation here.

It brought to mind the following quote from Dietrich Bonhoeffer, which I think relates:

"What is of ultimate importance is now no longer that I should become good, or that the condition of the world should be made better by my action, but that the reality of God should show itself everywhere to be the ultimate reality. Where this is faith in God as the ultimate reality, all concern with ethics will have as its starting-point that God shows himself to be good, even if this involves the risk that I myself and the world are not good but thoroughly bad.
...
The question of good becomes the question of participation in the divine reality which is revealed in Christ. Good is now no longer a valuation of what is, a valuation, for example, of my own being, my outlook or my actions, or of some condition or state in the world. It is no longer a predicate that is assigned to something which is in itself in being. Good is the real itself. It is not the real in the abstract, the real which is detached from the reality of God, but the real which possesses reality only in God. There is no good without the real, for the good is not a general formula, and the real is impossible without the good. The wish to be good consists solely in the longing for what is real in God."

I LOVED what you shared here, THANK YOU!!!

Here are some of my thoughts about what you have shared, http://unfoldingmystery.blogspot.com/2009/09/sinless-perfection-or-sinning-less-or.html

Great post. I am finding more and more that this life with God is like living in the middle of a paradox. We like to think of it as "balance," but really, it is living amidst to extremes: My sinfulness and His grace extended to me causing me to live right now, right here, always aware of my tendency towards sin, but receiving His grace to walk upright.
It is mind boggling and almost impossible to put into words. It is that moment when knowledge becomes experience.