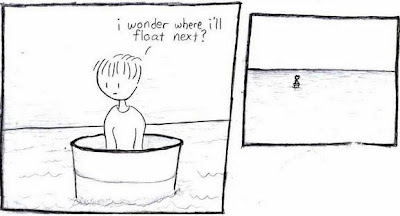 Isn't this how you feel somedays?

The tags I added to this post say it all. Doubts, Faith, Fear, Father's love, Shunning, Trust, Depression. They are all with me in my little tub.

I've always seen the ocean as the vastness of God and his love for me. So actually this is a peaceful picture to me. Lonely but peaceful.


That is, of course, the question that faces the both of us (and at least several others, I think) as we've moved away and have an ecclesial tabula rasa. What do we do for church? We ask God, like, every day now.

I'm kind of drifting as well. I'm waiting for God to show me what he wants as far as church. I know at some point my wife and I will leave the church we are currently in, but we're waiting for what's next.

That was me a few months ago. I've gone past the drifting phase and I feel like I'm in the middle of the rapids, holding on for dear life.

I've found it interesting that, in leaving the protective bubble of "knowing how things oughta be," it's been very much (hate to use the over-used analogy:) like Neo waking up. Things are slimier, uglier, scarier, and more demanding than I'd ever imagined... Waking up does not make anything easier. That said, it's so much better to have my eyes open. I wouldn't take it back, not for a moment. :)

Anon, "ecclesial tabula rasa" I love this. I shall use it some day. We are praying for you.

Co_heir. If it wern't for Wan]yne's stuff at Lifestream.org I don't think I would be still in the barrel in the pic. I think I would have drowned by now. If you haven't read his "so you don't want to go to church" book online, it was a lifesaver for me even though I go through times of intense doubts.

aaron, Yeah, when I looked at the pic I looked for the falls off in the distance :0 We are rooting for you! You know the way to face the rapids is to keep paddling faster than the water is taking the boat.

Molly, I root for Neo to take the other pill each time I watch the movie. Stay where you are...!!! Don't take the red on!!!
Not really....well kind of really. In so many ways I wish some days that I could go back but then I wake up and re-realize the freedom and grace out here. No wonder the people of Israel longed for Egypt. I'm far less critical of them nowdays.

Boy, your picture gets me.
I had a dream many years ago of being in a small lifeboat, drifting around.
I kept waiting for the rescue...but somehow, the rescue isn't what I imagined it would be.
I think I drifted until I found an island, then from there, travelled a bit.
In other words, church as I have known it, and as I've seen it, doesn't work at all for me.
Though I interact a bit with homechurch..I don't think that I'm looking for anything like that anymore.
I think, maybe, God has something else in mind. And I've come far enough, that I'm willing to walk this out with Him.
If there is anything I would like to remind you of....is that you don't have to make anything happen.
God's love is bigger, and more creative than we can ever figure out...and He has something for you.
I have come to care about you, and your journey.
Getting to trust Him takes a long, long time..and letting go of all of our ideas of what it is to walk with Him....
just some thoughts....:)

Boy, I'm in the same tub -- well maybe not the same one, but one that looks a lot like it. Funny thing is that last night, God unexpectedly turn my tub over. It was actually rather refreshing.

Che,
If there is anything I would like to remind you of....is that you don't have to make anything happen.
Keep it up!! You really do know me ;)
Thanks so much. Your comment of caring is like a warm cup of coffee to my heart.

Rick, I loved what you wrote about today. Tub tossing can be a good thing.