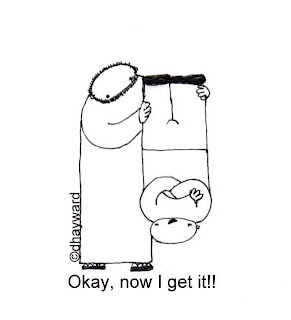 I love what I am seeing in scripture lately. I love it when it rocks my world with it's upside down way of seeing the Kingdom.

Internet Monk had a link the other day to Greg Boyd's website where, starting in October, they are beginning a series of weeks looking at some of the parables of Jesus and how he turns the thinking of the day upside down. It is entitled: The Great Reversal - The Upside Down Kingdom of God. I went onto the site and just browsed the passages he uses and then especially the cultural context that Jesus spoke into. I urge you to do the same.

Some of the ones that really stood out to me was how the world then viewed the poor, sick and destitute people. Like I wrote yesterday, both the rich and the poor believed that God did not love the poor and had no desire to be around them. Your riches were proof that God was on your side and blessing you.

One thing that Boyd points out is the importance of being asked to a banquet. See, in that day to be asked to a banquet showed your status in the city. Even where you sat at the table would show your importance. So when Jesus tells the story of a man throwing a banquet for his friends and his friends coming up with a lame excuse to not attend, it was a major slap in the face of the host. You never turned down an invitation. It was a major honor in that time to be asked to a banquet. Someone was spending a ton of money on the food. Therefore, it would mean the end of your relationship if you declined - especially for such a lame reason. So when Jesus then said that the host gave instructions to his servant to go to the highways and byways to compel the outcasts to come to his banquet...it was a HUGE deal. The most interesting thing is the word compel. See, these people had to be compelled to come because in that culture, even if they were invited, they were supposed to turn down the invitation(!!!) because they were not favored enough of God. You would never accept the invitation, because to do so was dishonoring your host.

Just the idea that Jesus loves us so much that he compels us to come to Him. Even when we have screwed up so much that we can't see why he would want us to come. Plus, Boyd pointed out that, in actuality, there was enough food prepared that there would have been enough for the original guests and those that were invited later. (He doesn't hate the rich either)

The other one that really struck me was the passage where the Pharisees came to him with the disciples of John and accused Jesus of eating and drinking with the sinners (not necessarily those who sinned but this bunch that were labeled outcasts because of their disease or poverty or lifestyle) Boyd says that the word for eating with the sinners implies that Jesus was actually hosting banquets and inviting the oppressed in.

I had never thought of Jesus hosting a banquet. I just always saw him as having no home therefore he always attended someone elses' house. But just the thought that Jesus hosted these people warmed my heart. No wonder the Pharisees got so bent out of shape. Jesus was not just ministering to these people, he was honoring them. And they (the Pharisees) were not getting invited to sit at the important seats.

I also loved the one where he was eating at a banquet at some Pharisee's house (the last one he was invited to by the way! ;P) Jesus told a story and began it with something like this. "Suppose you were a shepherd and had 100 sheep. You lost one....." He goes on from there. But the funny thing was that he said, "Suppose you were a shepherd." See, shepherds were one of those 'sinner' type people. They were the ones that God did not like. It would be like sitting down with a bunch of prophets, pastors and self proclaimed apostles today and starting a story like this; "Suppose you were a male prostitute..." You can hear the silence! "How dare he!!!"

I love the heart of Jesus today and want him to show me some more of his upside down kingdom as it relates to my own life.

A beer to Naked Pastor for use of his brilliant comic.

In the past couple of years, I have really been enjoying reading - again - the stories of what Jesus did, and how he did things, now that I am seeing them with this "upside down" view that I never knew existed. The actions of Jesus make so much more sense when I read them now.

Before, they were nice stories. Now, they show how much of a radical he really was, and how much he opposed "the system".

I like the drawing - it could also be used by the many prosperity ministries out there as they 'shake down' their members for the kingdom of God.

I LOVED this..."Jesus was not just ministering to these people, he was honoring them."

I was commenting on something Tracy had said over at my site, and I shared how I was so deeply impacted buy this short sentence.

" That thought so exploded within me “honouring them”, wow, what majesty, power, sheer delight!
I might even put some thoughts down later re: this as I totally loath anything related to religious speak relating to ministry, ministering or any other derivatives asscociated with it.
Wow, Jesus, honours me with His presence, His life/love, and now I get to honour others, how cool is that!!!"